Is Deodorant Bad for You? Answers to Your Questions.

The big question on everyone's mind ... is deodorant really safe?

Learn more about aluminium, parabens, phthalates and triclosan, and why questions are being raised about their safety.

For most of us, deodorant is just another little part of daily life. It’s such a regular routine staple, we hardly ever even pay it a thought. But with the scientific community raising red flags about certain chemicals found in our favourite odour-stopping products, it’s worth taking a moment to get to know what’s really in your deodorant.

Read on to learn a little more about some of the nasties that synthetic deodorants can carry, and why many are choosing to steer clear of synthetic products altogether.

Could deodorant be bad for you?

Deodorant is a personal care item that we rely on every day to keep us feeling fresh and confident. We use it often, sometimes once a day, sometimes more. We all want to smell good and feel good, but we also want to feel safe. Which is why questions over the safety of deodorant have long been a cause for concern.
Over the years, there’s been talk that deodorant could cause breast cancer or Alzheimer's. While there’s no conclusive scientific evidence that deodorants are unsafe, there are a few particular ingredients that set off some fairly loud alarm bells.

Four of the most controversial deodorant ingredients are aluminium, parabens, phthalates, and triclosan. So, is aluminium in deodorant safe?

Over the next couple of sections, we’ll cover what those ingredients are, and why some big questions are being raised about their safety.

While there’s no conclusive evidence that antiperspirants are unsafe, ever since the first antiperspirant hit the market, women have worried that blocking their sweat ducts could be bad for their health. And they’re not the only ones; many scientists have also raised concerns of their own.

In 2017, a team of Austrian scientists conducted a 1:1 age-matched case-control study to investigate the risk for breast cancer in relation to self-reported underarm cosmetic products (UCP) application. They measured the aluminium content in breast tissue from 418 women – 209 that had been diagnosed with breast cancer and 209 that hadn’t. All the women also completed a questionnaire on underarm hygiene habits.

At the end of the study, the scientists reported:

“Our findings suggest that frequent use of UCPs may lead to an accumulation of aluminum in breast tissue. We could show that women who reported to use UCPs several times a day starting at an age under 30 years may even have an increased risk for breast cancer. Until definitive answers about the involvement of aluminum in carcinogenesis of breast cancer, we recommend that particularly women at their younger ages should be careful with the use of UCPs and avoid its excessive use.” In 2018, a team of scientists from The University of Thessaly in Greece studied the potential interference of aluminium chlorohydrate with estrogen receptor signalling in breast cancer cells.

“Our findings do not provide conclusive evidence that aluminum is a breast carcinogen. However, the daily exposure to aluminum in connection with its possible role as an endocrine disruptor raises concerns about the safety of its use.”

These scientific studies aren’t conclusive, but the recommendation is to be careful. Ultimately it’s up to all of us to decide what we’re comfortable putting on our bodies. What about parabens, are they safe in deodorants?

Parabens are lab-made synthetic chemicals often used as preservatives in personal care products. They stop the growth of bacteria and fungi, which makes them a popular ingredient in deodorants.

Parabens can be absorbed through the skin and can mimic estrogen. They're classified as xenoestrogens, "synthetic compounds that mimic endogenous estrogens by binding to and activating estrogen receptors."

The concern with these chemicals is that "scientific studies suggest that parabens can disrupt hormones in the body and harm fertility and reproductive organs, affect birth outcomes, and increase the risk of cancer."

At this stage, there’s no conclusive scientific evidence to show parabens cause breast cancer. But FDA scientists continue to review published studies on the safety of parabens.

Their latest take on the issue is, “we do not have information showing that parabens as they are used in cosmetics have an effect on human health.” And what about phthalates, how safe are they?

The American Academy of Pediatrics published an article in 2008 that found infants exposed to infant care products – specifically baby shampoos, baby lotions, and baby powder – showed increased concentrations of phthalates in their urine. However, the FDA isn’t clear on what impact, if any, these chemicals have on human health.

Finally, what about triclosan in deodorant, is that safe?

Triclosan is an antibacterial laboratory-manufactured chemical, used in deodorants to kill bacteria. It’s considered an endocrine disruptor. Triclosan has been added to personal care products for decades, including deodorant. In 2016 the FDA banned the use of triclosan in over-the-counter consumer antiseptic products, including hand soaps and body washes.

A year later, the FDA declared that triclosan isn’t generally recognised as safe and effective for antiseptic products used in healthcare settings. At the time of writing, triclosan is still allowed to be used in deodorants. Are there aluminium-free, paraben-free, phthalate-free and triclosan-free deodorants out there?

You’ll find plenty of deodorants on the market that are free of aluminium, parabens, phthalates, and triclosan. But that doesn’t necessarily mean they’re natural. Many of these deodorants contain other synthetic ingredients, like propylene glycol.

Beat the Microbead has a Zero Certification system designed to help consumers avoid plastics in their personal care products. They also provide a handy list of ingredients to look out for on product packaging. As they say, ‘the truth is on the back’!

At the end of the day, it’s up to us to decide how we take care of our bodies, and what we do and don’t expose them to. If the chemicals in your deodorant are giving you cause for concern, switching to a natural option might be right for you. Shop the Everkind certified organic range, and find the right natural deodorant for you. 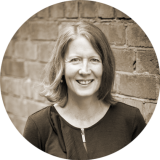 In her pre-mum life Amanda-Jane was an environmental lawyer. When her children were little she and her family moved to the country in a market gardening area, where they experienced first-hand the toxic impact of conventional horticulture on groundwater, land and personal health. This experience launched her on a journey to restore her family's health and find practical, truly natural solutions for everyday needs. Amanda-Jane became the founder and creator of Everkind - a body care brand strongly committed to providing body kind, people kind, planet kind essentials that work.

Hi..We are Sooo fortunate to have these amazing products here in nz…..Everkind is fantastic on all levels…….thank you for your care and expertise….

Comments will be approved before showing up.